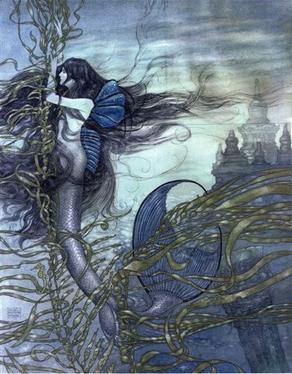 "The Mermaid" won the 2006 Art of Storytelling competition through the Delaware Art Museum and Night Kitchen Interactive.  It accompanied the artwork of Howard Pyle, also titled "The Mermaid."

When my poem won, I posted a link about it at one of my favorite writing web sites,JacketFlap.  Soon after, I received an email that started a whole new chapter of excitement for this poem.

The email was from artist/illustrator, Angel Dominguez.  He had read and enjoyed "The Mermaid." As exciting as that was, he also suggested he would like to create several illustrations to accompany the poem so that we could consider submitting the work jointly for publication as a children’s picture book.        Then Angel brought my mermaid to life.  With Angel’s permission, I am so proud and excited to share his first illustration with you here.

As the project unfolds, I'll be adding updates including, hopefully, publication news!